Home » Blog » WATCH: One Of The Scariest Men On The Planet Is Preparing For His MMA Debut 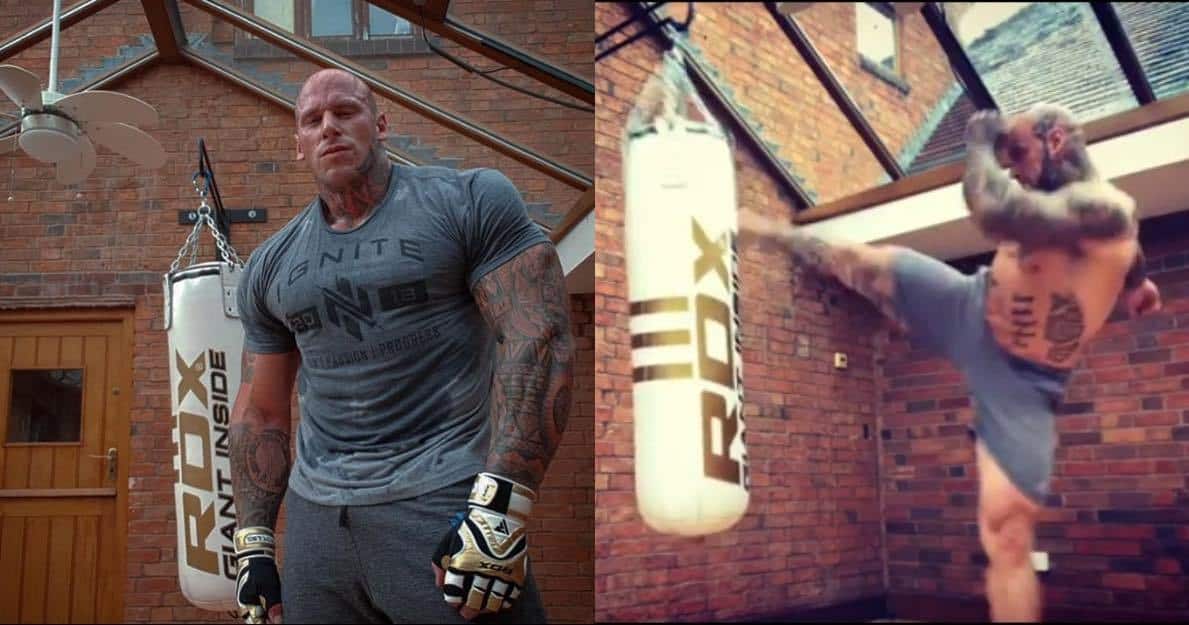 The calm before the storm.

The MMA world woke up to exciting news on Sunday when Europe’s biggest promotion, Poland’s KSW, bolstered its line-up with the signing of actor and professional bodybuilder Martyn Ford.

Ford, who stands at an imposing 6-foot-8 and carries 320-pound shredded muscles, appeared at KSW 45 last Saturday in Wembley to announce his signing with the Polish promotion and confirm that he will see action in early 2019.

The 33-year old pagoda may be months away from his professional MMA debut, but he is already taking serious preparations before he sets his foot in the KSW cage for the first time.

Ford’s childhood dream was to become a part of England’s cricket team. But that did not turn to reality as a bad injury stopped him from playing the sport.

However, this setback opened a new door for him as he entered the world of bodybuilding. The boy who dreamt of playing for the national team became a 140-kg monster, then rose to prominence in the fitness world and starred in some blockbuster action films.

In 2016, he shared this story of rising from the adversity in an Instagram post, telling how this bad luck and his focus and commitment turned him into a fitness icon that he is today.

“I was lost when I finished playing cricket. I was convinced I would turn pro and that would be my life set out. With injuries, bad luck and just losing love for the game that never happened. But the void was never filled. I knew deep down I needed to succeed at something, that I had an ability to shine in some way.”

“I have always been so focused and committed with a crazy ambition to win. Fast forward to today, I’m travelling the world with fitness, made two films with three more already lined up. Not to mention three businesses to my name.”

Two years later, a new door has been opened for him anew after landing a contract with a prestigious mixed martial arts promotion in Europe.

The challenge for Ford is to bring in the dexterity and quickness in his game, which has been sacrificed in bodybuilding training. He also needs to develop skills in jiu-jitsu, Muay Thai, boxing, and wrestling.

Well, it looks like ‘The Nightmare’ is aware of the demands of the sports. Months before his professional MMA debut, Ford is already doing a lot of work as part of his preparation for his upcoming fight.

“Warming up, believe it or not, at one time I was incredibly flexible, it will come back, that much I do know. Reducing my weight training, increased stretching and flexibility, focusing on movements and being functional and explosive is now key.”

Working on his boxing skills:

Working day and night to bring this plan together, one thing I will not be beat on is HARD WORK and DEDICATION !!! Each day is a step in the right direction, sticking to a plan and following through with my commitment. Only person I have to answer to is the reflection of the mirror, and I promise never to let him down !!! @rdx_sports #rdx @darrenhughes2370 #mma #striking

Ford is showing notable improvements day by day and is looking sharper and quicker than ever.

The famous builder is slated to compete in KSW’s heavyweight division (120kg), with five-time World’s Strongest Man titlist Mariusz Pudzianowski looming as one of the potential opponents.

WhatProtein.co.uk participates in various affiliate programs, and we sometimes get a commission through purchases made through our links.